While the majority of current vanadium demand remains underwritten by the steel industry, as an additive to strengthen various grades of steel, a growing segment for vanadium demand is opening up for its use in vanadium redox flow batteries (VRFBs) – large-scale, long-duration battery storage systems, which are aimed at supporting large, utility and commercial-scale renewable energy projects.

Vanitec, the not-for-profit international global member organisation whose objective it is to promote the use of vanadium-bearing materials, says that the growth of vanadium production and consumption amidst C-19 challenges has shown the resilience and adaptability of the vanadium industry. Furthermore, vanadium’s role in the growing energy storage sector is expected to increase dramatically over the coming years as a result of increased deployment of renewable energy projects.

Vanitec’s global vanadium statistics show that of the 109 418 MTV of vanadium produced in 2020, approximately 1 881 MTV was used within the energy storage sector during the same year.

Through the commitment to meeting the objectives of the Paris Agreement, many countries around the world have increasingly began to adopt renewable energy over fossil fuel-based energy as a means to mitigate the effects of climate change and reduce carbon footprints.

As such, the growing necessity of energy storage solutions is inherently linked to the growing adoption of renewable energy technologies.

However, as a result of the variable nature of renewable energy systems, whose electricity generationis not always aligned with electricity demand, energy storage systems, such as VRFBs – which use vanadium electrolyte to store energy – can be used as a means to reliably store energy produced from solar or wind power for use as electricity at a later stage.

Further, VRFBs are also an important tool for ensuring the reliability of power grids, smoothing out peaks and deficits in power demand, thus preventing sudden surges that can overload local distribution systems. This serves to maintain a consistent and uninterrupted flow of electricity, thereby creating significant opportunities for the energy storage market.

According to a report titled: Redox Flow Batteries 2021-2031 – published earlier this year by market research and business intelligence firm IDTechEx, a significant adoption of redox flow batteries is expected. 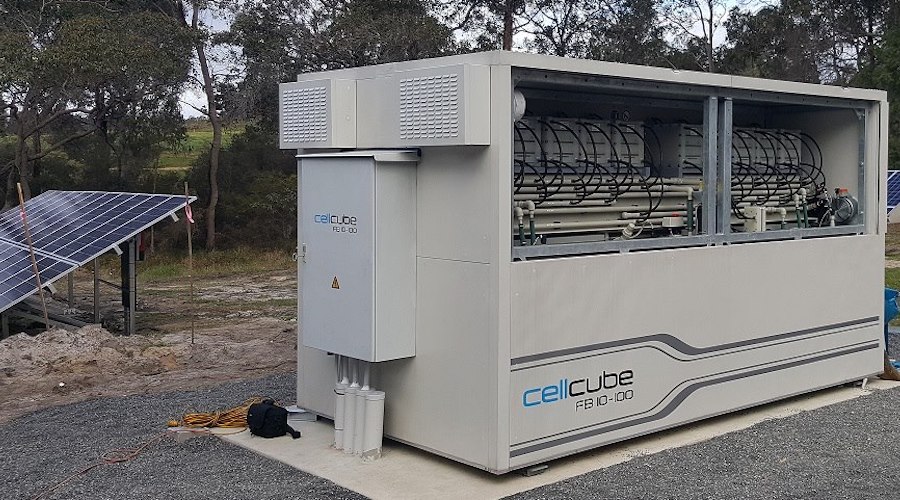 In a separate report published by IDTechEx earlier this year, titled: Batteries for Stationary Energy Storage 2021-2031, the firm said that among the different redox flow battery chemistries, VRFB is currently the most investigated and most widely adopted chemistry for long-duration, utility-scale energy storage applications due to its long historical development from the 1980s. In addition, IDTechEx noted that VRFBs also have the highest potential to capture the largest market share of such an application.

While lithium-ion batteries are popular and currently preferred for use in electric vehicles, VRFBs are favoured for large-scale energy storage systems.

One of the strongest argument for VRFBs is its sustainability – offering one of the most sustainable options in the renewable energy storage market.

The core component of a VRFB – vanadium electrolyte – can be recycled more easily than other battery chemistries and can be reused in other VRFB installations when the battery it is being used in reaches the end of its life. Over 90% of the vanadium in each VRFB can be reused or recycled.

Furthermore, the non-degradation of the vanadium electrolye means potentially unlimited rechargeability of a VRFB and abattery with a generally longer lifespan before being decommissioned.

Researchers at Texas A&M University have shown that when used in conjunction with renewable energy sources, VRFBs can deliver a lower carbon footprint of up to 78% per MWh1 than the main competitor technology, lithium-ion batteries.

Mikhail Nikomarov, Chairman of Vanitec’s Energy Storage Committee commented: “Despite constituting only a small portion of total vanadium demand, year-on-year demand for vanadium stemming from the energy storage sector increased by 26% from 2019 (1 385 MTV). While there are hundreds of VRFB installations globally and many more under construction, findings of the VRFBs reduced carbon footprint will aid in more projects being earmarked for future development.”

While China is by far the largest VRFB market, other countries, including Japan, Australia, Canada, South Africa and the US, also adopting large-scale VRFBs.