As per a revised study conducted by Persistence Market Research, the North America ignition interlock devices market has been estimated to account for US$ 52.76 Mn in 2021, and is expected to reach US$ 110 Mn by 2031, expanding at a CAGR of 4.4% over the said period.

Industry analysis on ignition interlock devices on North America depicts that the U.S. holds a mammoth share of 80% in the region, and the market here is expected to expand at a CAGR of 6%, which is higher than the regional CAGR of 4.4%.

FACTS AT A GLANCE 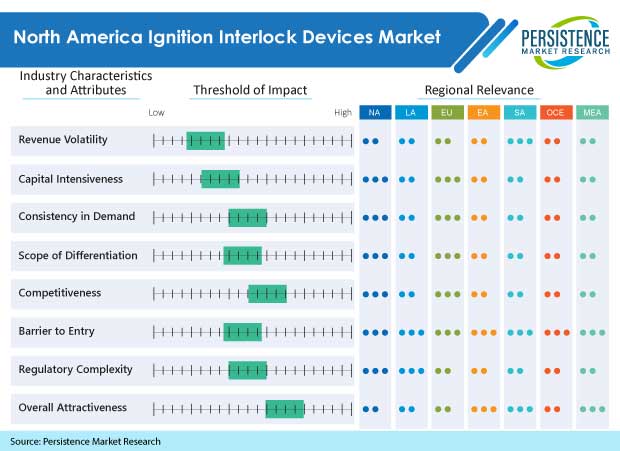 Ignition interlock device (IID) is an advanced breathalyzer connected to a vehicle’s ignition system. The amount of alcohol in a person’s breath is an indicator of an amount of alcohol present in his/her blood/body. IID prevents the ignition of the vehicle if the driver’s breath alcohol level exceeds that pre-set on the device.

IID is mainly connected to the vehicle dashboard or somewhere within the reach of the driver’s seat. IIDs are used as a tool by National Highway Transport Safety Authority (NHTSA) for controlling and reducing drunk driving incidences.

This report covers the North America market for ignition interlock devices in terms of value and volume. The report covers key trends drivers, restraints, and opportunities influencing the growth of the North America ignition Interlock devices market currently. Impact analysis of the key market drivers and restraints has also been measured based on the weighted average model to better equip clients with crystal clear decision-making insights.

How About Re-Inventing The Methodical Wheel In The North America Ignition Interlock Devices Market? Switch Over To The “Methodology” Tab! https://www.persistencemarketresearch.com/methodology/9170

The North America ignition interlock devices market is mainly driven by factors such as increasing number of driving under influence (DUI) incidence in the U.S. and Canada, increasing involvement of social organizations such as Mother Against Drunk Driving (MADD) and Fathers Against Drunk Driving (FADD), and use of ignition interlock devices by commercial fleet owners to avoid possible future accidents.